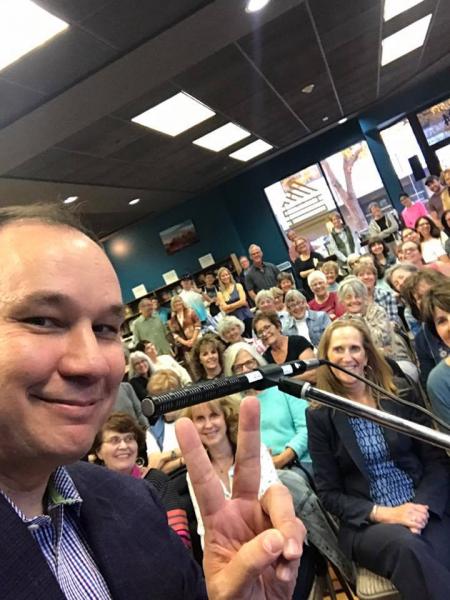 Jamie Ford is well known for his debut (and award-winning) novel, Hotel on the Corner of Bitter and Sweet. This book received positive reviews after its release, spending two years on the New York Times bestseller list. The novel was an IndieBound NEXT List Selection, a Borders Original Voices Selection, a Barnes & Noble Book Club Selection, Pennie’s Pick at Costco, and a Target Bookmarked Club Pick. It won the 2010 Asian/Pacific American Awards for Literature.

Born in Seattle and now living in Great Falls, Montana, Jamie graduated from the Art Institute of Seattle in 1988 and worked as an art director and as a creative director in advertising. Jamie's great-grandfather immigrated from Kaiping, China in 1865. His name was Min Chung, but he changed it to William Ford when he was working in Tonopah, Nevada. His great-grandmother, Loy Lee Ford was the first Chinese woman to own property in Nevada. Ford's grandfather, George William Ford, changed his name back to George Chung in order to gain more success as an ethnic actor in Hollywood. In his second novel, Songs of Willow Frost, Jamie explores Asians in Hollywood in the early twentieth century, around the time his grandfather was pursuing acting.

Jamie's stories have also been included in Secret Identities: The Asian American Superhero Anthology and The Apocalypse Triptych, a series of three anthologies of apocalyptic and post-apocalyptic fiction edited by John Joseph Adams and Hugh Howey.

Photo: Jamie Ford at This House of Books.

He is a member-owner of This House of Books since May 2016.

Love and Other Consolation Prizes: A Novel (Paperback)

Love and Other Consolation Prizes: A Novel (Hardcover)