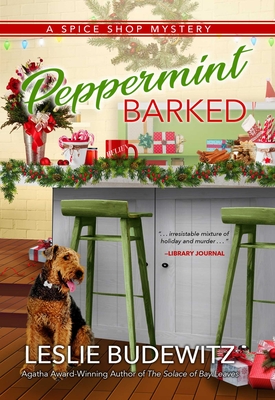 A Dickens of a Christmas turns deadly…

As the holiday season lights up Seattle’s famed Pike Place Market, Pepper Reece’s beloved Spice Shop is brimming with cinnamon, nutmeg, and shoppers eager to stuff their stockings. Add to the mix a tasty staff competition—a peppermint bark-off—along with Victorian costumes for this year’s Dickensian Christmas theme, and Pepper almost forgets to be nervous about meeting her fisherman boyfriend’s brother for the first time.

But when a young woman working in her friend Vinny’s wine shop is brutally assaulted, costumed revelers and holiday cheer are the last things on Pepper’s mind. Who would want to hurt Beth? Or were they looking for Vinny instead?

The vicious attack upsets everyone at Pike Place, but none more than Pepper’s own employee, Matt Kemp. At first, Pepper is baffled by his reaction, but his clandestine connection to Beth could hold the key to the assailant’s motive. Or perhaps it’s Vinny’s ex-wife who knows more than she’s letting on . . . and what about the mysterious top-hatted man with whom Pepper saw Beth arguing that morning?

As the secrets of the market come to light, long-held grudges, family ties, and hidden plans only further obscure the truth. Is it a ghost of the past rattling its chains, or a contemporary Scrooge with more earthly motives? As Pepper chases down a killer, someone is chasing her, and in the end, the storied market itself may hold the final, deadly clue.

A cozy holiday mystery full of culinary delights and a rich cast of characters, the sixth installment in the Spice Shop Mystery series will keep you turning the page . . . and reaching for another piece of peppermint bark.

Leslie Budewitz blends her passion for food, great mysteries, and the Northwest in two cozy mystery series, the Spice Shop Mysteries, set in Seattle’s Pike Place Market, and the Food Lovers’ Village Mysteries, set in NW Montana. Leslie is the winner of three Agatha Awards—2013 Best First Novel for DEATH AL DENTE, the first Food Lovers' Village mystery; 2011 Best Nonfiction, and 2018 Best Short Story, for “All God’s Sparrows,” her first historical fiction.  Her work has also won or been nominated for Derringer, Anthony, and Macavity awards. A past president of Sisters in Crime and a current board member of Mystery Writers of America, she lives and cooks in NW Montana.

Budewitz lays down red herrings with the aplomb of a fisherman, quite apropos since the fish market is one of the famous spots in the Pike Place Market.
— J