Hiking the Green Mountains: A Guide to 35 of the Region's Best Hiking Adventures (Regional Hiking) (Paperback) 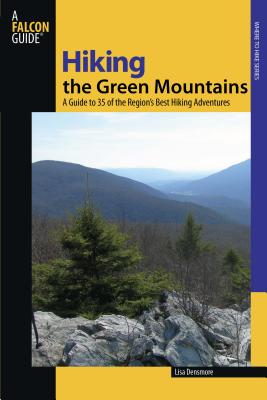 By Lisa Ballard
Email or call for price
Out of Print

Whether to take in a 360-degree view mountaintop view, a dramatic waterfall, or a pristine pond, this book takes readers to thirty-five of the best day hikes and weekend backpacking trips in the Green Mountains, some well-known and others off the beaten path.

Lisa Densmore has spent most of her life on trail. She grew up hiking in the High Peaks region of the Adirondacks in part to stay fit for alpine ski racing. She got her first introduction to the Green Mountains in Vermont in 1979, as a student at Stratton Mountain School, where as a member of the U.S. Ski Team and later a pro ski racer, she hiked throughout the Green Mountains during the off-season. The mountains in both Vermont and New Hampshire were her training ground at Dartmouth College, where she became a lifetime member of the Dartmouth Outing Club. Now a 20-year resident of Hanover, New Hampshire, she is perfectly located on the Vermont - New Hampshire border for hiking in either state. As a result, she has hiked most of the peaks in the Green Mountains, at first for fun and then professionally as multi-media journalist. It is Lisa's television work that has made her a recognized authority on hiking and backpacking, particularly in New England. She has written, produced and hosted numerous shows and feature segments, including Tricks of the Trail (RSN) which won an International Teddy Award for best instruction program devoted to the outdoors, and for Gear Guide (OLN) which won two Telly Awards. She is currently involved with two shows on PBS. As host of Windows to the Wild, Lisa takes viewers on adventures where they can enjoy the scenic beauty of a particular wilderness area while learning about its natural history, flora and fauna. Lisa is also the co-host and field producer for Wildlife Journal for which she has received three Emmys(c)! On Wildlife Journal, Lisa introduces viewers to various backcountry activities - including hiking and camping - with an emphasis on safety and conservation. Lisa is also an accomplished freelance writer and a nationally recognized nature photographer whose articles and images on hiking and camping have appeared in magazines as diverse as Vermont Life, Vermont Sports, Backpacker and Women in the Outdoors. She has published literally hundreds of articles over the last two decades. She is also the author of three books, Ski Faster (McGraw-Hill, 2000), Best Hikes with Dogs: New Hampshire & Vermont (The Mountaineers Books, 2006), and 50 Most Scenic Hikes in New Hampshire (Huntington Graphics, to be released in Fall 2007).