The New Tsar: The Rise and Reign of Vladimir Putin (Paperback) 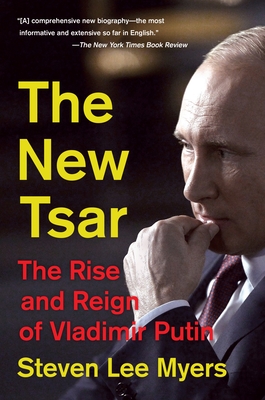 In this gripping narrative of Putin's rise to power, Steven Lee Myers recounts Putin's origins--from his childhood of abject poverty in Leningrad to his ascent through the ranks of the KGB, and his eventual consolidation of rule in the Kremlin.

As the world struggles to confront a bolder Russia, the importance of understanding the formidable and ambitious Vladimir Putin has never been greater. On the one hand, Putin's many domestic reforms--from tax cuts to an expansion of property rights--have helped reshape the potential of millions of Russians whose only experience of democracy had been crime, poverty, and instability after the fall of the Soviet Union. On the other, Putin has ushered in a new authoritarianism--unyielding in its brutal repression of dissent and newly assertive politically and militarily in regions like Crimea and the Middle East. The New Tsar is a staggering achievement, a deeply researched and essential biography of one of the most important and destabilizing world leaders in recent history, a man whose merciless rule has become inextricably bound to Russia's forseeable future.

STEVEN LEE MYERS has worked at The New York Times for twenty-six years, seven of them in Russia during the period when Putin consolidated his power. He spent two years as bureau chief in Baghdad, covering the winding down of the American war in Iraq, and now covers national security issues. He lives in Washington, D.C. This is his first book.

“Steven Lee Myers’s The New Tsar is not the first biography of Putin, but it is the strongest to date. Judicious and comprehensive, it pulls back the veil… from one of the world’s most secretive leaders. What is most striking, given the aura of steely consistency that Putin cultivates, is how he has changed over the years…. The great strength of Myers’s book is the way it shows how chance events and Putin’s own degeneration gradually cleared the path to the Ukraine crisis… Putin emerges as neither a KGB automaton, nor the embodiment of Russian historical traditions, nor an innocent victim of Western provocations and NATO’s hubris, but rather as a flawed individual who made his own choices at crucial moments and thereby shaped history.”
—Daniel Treisman, The Washington Post

“What Steven Lee Myers gets so right in The New Tsar, his comprehensive new biography — the most informative and extensive so far in English — is that at bottom Putin simply feels that he’s the last one standing between order and chaos… What Myers offers is the portrait of a man swinging from crisis to crisis with one goal: projecting strength… A knowledgeable and thorough biography… Putin himself now represents the chaos he so abhors — the chaos that will surely come in his wake.”
—Gal Beckerman, The New York Times Book Review

"Steven Lee Myers coherently, comprehensively, and evenhandedly tells the story not only of Putin’s glory years, but also of his hardscrabble childhood in Leningrad, his checkered academic career, his undistinguished work as a KGB agent in East Germany, his remarkably loyal service to the mayor of post-Soviet St. Petersburg, and his reluctant but speedy climb through President Yeltin’s ministries in the late 1990s."
— Bob Blaisdell, The Christian Science Monitor

“Combining skilled story telling, psychological examination and political investigation, Steven Lee Myers succeeds brilliantly in this biography of Vladimir Putin. Explaining the dangers that Putin’s Russia may and does pose, Myers effortlessly and expertly guides the reader through the complexities of the Russian Byzantine governing style and the country’s politics and identity. In the end, the book provides one of the most comprehensive answers to a puzzling question: Despite all the changes that Russia has gone through during communism and post-communism, why is it still an empire of the tsar?”
—Nina Khrushcheva

“Such an understanding of Putin’s early life and the evolution of his leadership is lacking. [Myers’s] methodology is sound and, I believe, the only way to capture such an intimate understanding of Russia’s iron man.”
—Ian Bremmer, author of Superpower

“Personalities determine history as much as geography, and there is no personality who has had such a pivotal effect on 21st century Europe as much as Vladimir Putin. The New Tsar is a riveting, immensely detailed biography of Putin that explains in full-bodied, almost Shakespearean fashion why he acts the way he does.”
–Robert D. Kaplan

“The reptilian, poker-faced former KGB agent, now Russian president seemingly for life, earns a fair, engaging treatment in the hands of New York Times journalist Myers… [who] clearly knows his material and primary subject… Putin used the perks of power to create a complex system of cronyism and nepotism. Myers shows how Putin convinced everyone that this way of operating was part of the Russian soul and how he perpetuated it through an archaic form of Russian corruption… Myers astutely notes how Putin’s speeches increasingly harkened back to the worst period of the Cold War era’s dictates by Soviet strongmen… A highly effective portrait of a frighteningly powerful autocrat.”
–Kirkus (starred review)

“What could be more timely and relevant than a new, thorough biography of Russian President Vladimir Vladimirovich Putin, from a writer who was The New York Times correspondent in Moscow for seven years of the Russian chief's reign?... Russia has lived through numerous prime ministers, a stock market crash, a debt default, moments of paralysis, wrenching warfare in Chechnya, brutal murders and good and crooked elections, all recounted succinctly by Mr. Myers… Putin's and Russia's relations with the United States are dealt with candidly.”
—Dan Simpson, Pittsburgh Post-Gazette