The Shadow War: Inside Russia's and China's Secret Operations to Defeat America (Hardcover) 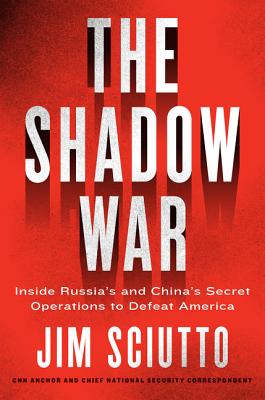 Are we losing a war few of us realize we’re fighting?

That kind of thinking is outdated and dangerous. Emboldened by their successes, these countries are, in fact, waging a brazen, global war on the US and the West. This is a new Cold War, which will not be won by those who fail to realize they are fighting it. The enemies of the West understand that while they are unlikely to win a shooting war, they have another path to victory. And what we see as our greatest strengths—open societies, military innovation, dominance of technology on Earth and in space, longstanding leadership in global institutions—these countries are undermining or turning into weaknesses.

In The Shadow War, CNN anchor and chief national security correspondent Jim Sciutto provides us with a revealing and at times disturbing guide to this new international conflict. This Shadow War is already the greatest threat to America’s national security, even though most Americans know little or nothing about it. With on-the-ground reporting from Ukraine to the South China Sea, from a sub under the Arctic to unprecedented access to America’s Space Command, Sciutto draws on his deep knowledge, high-level contacts, and personal experience as a journalist and diplomat to paint the most comprehensive and vivid picture of a nation targeted by a new and disturbing brand of warfare.

Thankfully, America is adapting and fighting back. In The Shadow War, Sciutto introduces readers to the dizzying array of soldiers, sailors, submariners and their commanders, space engineers, computer scientists, civilians, and senior intelligence officials who are on the front lines of this new kind of forever war. Intensive and disturbing, this invaluable and important work opens our eyes and makes clear that the war of the future is already here.

Jim Sciutto is CNN's chief national security correspondent and anchor of CNN Newsroom. After more than two decades as a foreign correspondent stationed in Asia, Europe, and the Middle East, he returned to Washington to cover the Defense Department, the State Department, and intelligence agencies for CNN. His work has earned him Emmy Awards, the George Polk Award, the Edward R. Murrow award, and the Merriman Smith Memorial Award for excellence in presidential coverage. A graduate of Yale and a Fulbright Fellow, he lives in Washington, D.C., with his wife, Gloria Riviera, who is a crisis communications professional and journalist for ABC News, and their three children.

“With The Shadow War, Jim Sciutto, my CNN colleague and distinguished journalist, has written a milestone tutorial on the nature of conflict in today’s world. Jim’s riveting writing style clearly explains the diverse array of the new forms of asymmetric power we confront—whether in the cyber, space, undersea, propaganda, or irregular forces realms. . . . Unlike other books on these subjects, The Shadow War doesn’t stop with just the ‘doom and gloom’ descriptions, but also offers thoughtful prescriptions on how to respond. A very enlightening, compelling, tightly organized, readable book.”
— James Clapper is the former Director of National Intelligence

&#8220For many years Russia and China have fought a war in the shadows to undermine the United States from the outer reaches of space to the deep seas of the Arctic. Sciutto’s excellent portrayal of those conflicts will keep you up at night.”
— Peter Bergen is the author of Manhunt: The Ten-Year Search for bin Laden from 9/11 to Abbottabad

“Jim has done a superb job capturing the current and future space and cyber threats to our national security. More importantly, he describes what the resulting vulnerabilities mean to the average citizen. This book should serve as a wake-up call for all of us.”
— General William Shelton (ret.) is the former Commander of US Air Force Space Command

“The Shadow War is a clanging alarm, urging us to recognize and prioritize the threats we’ve ignored for too long. In crisp and elegant prose, Sciutto masterfully lays out how we got here and what we can do to deal with the asymmetrical challenges posed by Russia and China. The Shadow War is as alarming as it is necessary.”
— Julia Ioffe, foreign policy correspondent for GQ

“We are all vaguely aware that America and the West have been challenged recently in new and unusual ways—from tampering with elections to misinformation to cyberattacks. Jim Sciutto puts it all together and helps us understand the new ‘Shadow War.’ This is a timely book, defining for us the nature of international conflict in the foreseeable future. Sciutto is a highly intelligent, determined, and hardworking reporter, and it shows. The book is deeply reported, crisply written, and thoroughly engaging.”
— Fareed Zakaria, author of The Post-American World