Home » About
Back to top

One of the things that makes This House of Books special and unique is the number of authors who have purchased shares. They represent a selection of top-notch authors across a broad spectrum of genres, and we're lucky to have their support. In return, we'll ask you to support them!

Click on their names below to peruse their books, and watch our event calendar for appearances in the store.

Doug Ammons, The Laugh of the Water Nymph And Other River Stories, Whitewater Philosophy, and A Darkness Lit by Heroes

Jimmie Ashcraft, Reflections of a Country Doctor, The Next Prescription, Side Effects, and Paging Dr. A.

John Billings, Into the Tall and the Uncut

Lynn Boughey, Harry Potter and the Art of Spying and Mission to Chara

Christine Carbo, Four novels in the Glacier Mystery Series: A Sharp Solitude, The Weight of Night, Mortal Fall, and The Wild Inside

Ivy Cayden, Everything All At Once

Giano Cromley, What We Build Upon the Ruins: And Other Stories, and The Last Good Halloween

Cal Cumin, Dust in the Wind: Poetry of a Time and The Sword Bearer Incident.

Markus A. Dawson, Getting Real (Estate): True Scenes from a Life of Everyday Chaos

Mike Dennison, Inside Montana Politics: A Reporter's View from the Trenches

T.S. Dickerson, The Scarring Underneath: A Post-Apocalypic Romance

Shelley Ann Douthett, Did I Say That Out Loud?: Ramblings in Retirement

Susan M. Elliott, Family Empires, Roman and Christian: Volume I Roman Family Empires, and Cutting Too Close for Comfort: Paul's Letter to the Galatians in Its Anatolian Cultic Context.

Gwen Florio, Silent Hearts, Under the Shadows, The Night of the Flood, Reservations, Montana, and more

Jamie Ford, Love and Other Consolation Prizes, Hotel on the Corner of Bitter and Sweet, and more

Tessa L. Gatz, The Fire in the Dark: The Truth Will Always Come Out

Rodney Gottula, Double! Not Half

Lowell Jaeger, Someday I’d Write This Down, Earth-blood & Star-shine, Or Maybe I Drift Off Alone, Poems Across the Big Sky II: An Anthology of Montana Poets, Driving The Back Road Home, How Quickly What's Passing Goes Past, and more

Adrian L. Jawort, Off the Path: An Anthology of 21st Century Montana American Indian Writers (vols. 1 and 2) and Moonrise Falling

Craig Johnson, the works in the Walt Longmire mystery series, which has been made into a TV series available on Netflix

Allen M. Jones, Sweeney on the Rocks, Montana for Kids: The story of our State, A Bloom of Bones, Last Year's River, A Quiet Place of Violence, and The Best of Montana's Short Fiction

Dee Jones, I Am Durc: Nomads

Ed Kemmick, Montana, The Lay of the Land, and The Big Sky, by and by: True Tales, Real People and Strange Times in the Heart of Montana

Christopher Kortlander, Arrow to the Heart: The Last Battle at the Little Big Horn: The Custer Battlefield Museum vs. The Federal Government

Melissa Kwasny, Pictograph: Poems, Where Outside the Body Is the Soul Today, Putting on the Dog: The Animal Origins of What We Wear, and more.

Carrie La Seur, The Home Place and The Weight of an Infinite Sky

Craig Lancaster, You, Me & Mr. Blue Sky, Julep Street, Edward Unspooled, and others

Elisa Lorello, You, Me & Mr. Blue Sky, Pasta Wars, Faking It, and others

Precious McKenzie, Sandstone: An Anthology to Support of This House of Books (ed.), Ruffian, Cinder Yeti, the Mother Natures series, A Vacation in Ruins, Peace, Love, and K-Pop, and much more!

Elizabeth McNamer, The Case for Bethsaida After Twenty Years of Digging: Understanding the Historical Jesus, Jesus and First-Century Christianity in Jerusalem, and others

Robin Newman, Don't Call Me Fuzzybutt, The Case of the Bad Apples, and others!

Sherry O'Keefe, From China to America: The Story of Amy Tan, Champion of Freedom: Aung San Suu Kyi, and others

Dianne Oberhansly, The Madonna of Starbucks and A Brief History of Male Nudes in America

Phillip K. Parker, The National Tour of the USS Constitution 1931-1933

Shann Ray, Shann Ray Ferch, American Copper, Forgiveness and Power in the Age of Atrocity: Servant Leadership as a Way of Life, and others

Ken Robison, Montanans in the Great War: Open Warfare Over There, World War I Montana: The Treasure State Prepares, Yankees & Rebels on the Upper Missouri: Steamboats, Gold and Peace, Confederates in Montana Territory: In the Shadow of Price’s Army, and others

Aaron Rosen, On Brick and Mortar Retailing: The easy way to learn the things you'll have to learn the hard way in retailing, Brushes with Faith, Where's Your Creativity?, Art and Religion in the 21st Century, Religion, Art in the Heart of Modern Manhattan (ed.) and more

Andrew M. Seddon, Farhope, Wreaths of Empire, What Darkness Remains: Thirteen Tales of the Supernatural and Unknown, In Death Survive: Ghostly Tales, and The DeathCats of Asa'ican: and Other Tales of a Space-Vet

Vicki Tapia, Somebody Stole My Iron: A Family Memoir of Dementia and Maggie: A Journey of Love, Loss & Survival

Amy Zhao, Invasion of the Aliens, The Pia the Pinena Fairy Series: The Moondust Adventures, The Legendary Judges of Magic, Saving Maui,

Are you a published author?

Take a look at the Fact Sheet for Published Authors to see the benefits of becoming a member-owner and getting your name on this list! 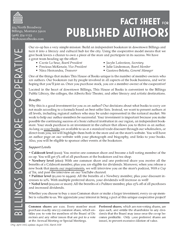